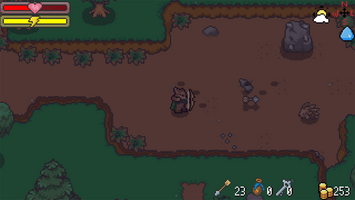 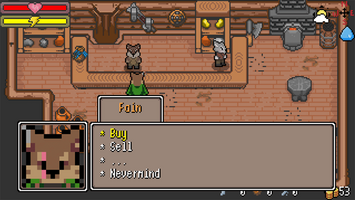 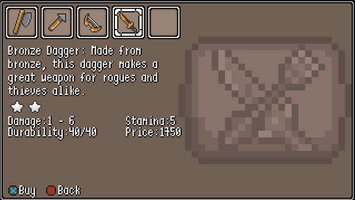 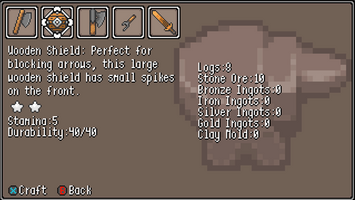 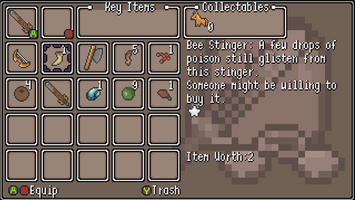 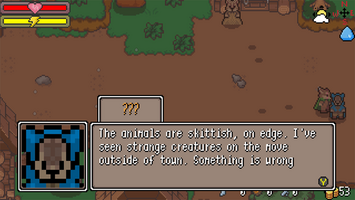 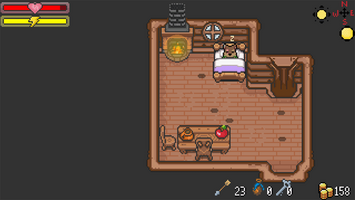 *Increased Bronze Sword Knockback(I don't know why it was so low, sorry about that.)
*Increased All Daggers and Wooden Stick Knockback.
*Bee's can no longer hit chickens over and over again.
*Pressing the Cancel action J on Keyboard or B or X on Controller will now close the dialogue box.
*Added Input Promotes on-screen when at shops and on the Inventory screen.
*Changed Dialogue Arrow UI to L and or Y Button UI.
*Added a Room Transition Screen.
*Added a Soft Collision to help prevent collision snagging.
*Added fallen trees that block path during the intro.
*Reworked all UI's In-Game.
*Unplugging and plugging a controller now enables/disables the Select Menu.
*Added Paused text to the in-game menu screen.
*Bows now display their damage in the inventory.
*Added Blue Crabs to the game, they can be found at the Beach.
*Blue Crabs can drop claws, that can be cooked.
*Reworked the Red Rock Inn.

*Items crafted at cooking pots or Forges don't save their item amounts when the game is loaded. (Looking into this.)

*The music stops playing at random times, to fix this try and get to an area that triggers a new song, like Red Rock Village or the Thylaic Caves, etc.

*Equipping a One-handed Item sometimes causes an item in the left or right hand to be removed. (In Testing)

An action adventure game, with the look and feel of old school 90's games, with modern game play elements.